Just think of all the toilet paper rolls that are discarded each day!  They serve their purpose and are tossed in the trash can without a thought. When I walked into the bathroom at work, I noticed a few sitting there waiting to be discarded.  Since my upcycling mission started, I tend to look at things a bit different.  I especially love to take something that most certainly would end up in the garbage and give it a second life. I snatched a roll and went home to craft The Spare a Square Project.

The initial project was a success, and I realized these card board rolls can be used in organizing my craft room items.  There are many upcycle ideas on the web when it comes to cardboard rolls. One amazing example, can be found here.  Word got out around the office that I was starting to save these rolls from the trash for a project to be determined later.  Suddenly, they started appearing on my desk and before I knew it, I had quite a few of them thanks to my recycling and equally curious friends.  I think they were curious to see what exactly I planned to do with them!

I was sitting in craft room pondering the idea and I decided to create craft supply wall storage. Initially, I was not sure what I would store inside them, that idea would come to me later.

First, I painted the inside of the tubes white with acrylic paint. 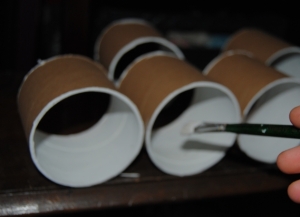 Next, I looked through the fabric that I had available and decided on a “fun” colorful pattern to decoupage. I cut pieces of fabric that would be enough to cover the outside of the roll.  I applied Mod Podge to the it with a foam craft brush, and placed it on to the fabric.

Once the Mod Podge was applied I “rolled” the toilet paper roll on the fabric, and it adhered nicely.

I trimmed away any excess fabric with a pair of scissors.

I repeated this process with all of them.  Once they were done, I used a high temp hot glue to glue them together. I arranged them in rows. Three at the bottom, then two then one. Like this:

I touched up the white paint in spots particularly around the edges, and once dry, added a Mod Podge finish to the entire project.

Now that the project was complete, I had to figure out what to store in it!  It didn’t take me long to come up with the idea of storing my smaller containers of paint, and it created easy access to any color I need.

Who needs a square, when you can have the whole roll?