Recently, we began preparation to move my daughter from her crib to a toddler bed.  When we chose a crib for our registry, we made sure it was a convertible style crib that would grow with her.  We were looking for what most consumers want, quality at a reasonable price.  We chose   the Graco convertible crib in espresso finish.

It appeared sturdy on the showroom floor and was priced right.  Initially, I was happy with the crib.  Then 18 months later, I notice a few of the metal springs had broken off the frame they were welded on.  One by one the springs broke off.  The crib needed to be reinforced with bungee cords.  We knew this bed would not last like we had previously anticipated. We were forced to come up with an alternative and purchased a new mattress and a toddler bed.  The original mattress was torn by sharp edges left where the springs used to reside.  This was a big disappointment.  We were expecting to use this convertible through her toddler years, but it was not to be.  The crib finally gave way and it was obvious it was no longer safe.  Luckily, the new bed was purchased and was on standby and we were able to quickly make the switch.

I am happy to report that the toddler apprentice loves her new “big girl” bed and the toddler bed experiment has gone surprisingly well!  She lays down and falls right to sleep! We were surprised how quickly she has adjusted.

When I dismantled the crib, most of it was broken and not salvageable.  The rail was still in decent shape.  I had seen some ideas online upcycling old cribs ranging from Repurposed crib benches  to crib rail Garden Trellis’s.  I wanted to keep this project simple.  I was preoccupied by a much larger, more daunting, task cleaning my daughter’s messy playroom!  I filled one trash bag with broken items and another with items to donate to those in need. This emptied one toy box for additional storage which reduced clutter.

My daughter has a large book collection she acquired before she was even born.  At my baby shower, the guests brought a signed book instead of a card. I loved this idea, but I did not have an ideal way to store all the books we received.  They basically sat in a wooden box on the playroom floor.

I thought the crib rail would be a great alternative way to display her books, and keep them off the floor.  Since I was struggling to get her room organized, and did not have the time,  I decided to leave the crib rail in its original finish.  It also matched the playroom well.

If you would like to change the original color, a can of white latex primer works well.  Once dry, paint as desired.    I also suggest using longer screws to anchor each side of the crib rail to the wall. When doing this, lean the crib against the wall on a slight angle so the books can hang over the rails.  I did not have the proper screws handy, so I had to improvise and use one smaller screw through the first rail.  This worked, but the trade-off  is that the first rail cannot be used for display. 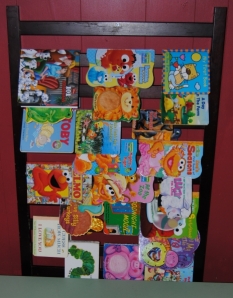 I love it!   Being the sentimental fool that I am, it also is nice to keep a piece of the crib for nostalgia!  I also repurposed her changing table into a kitchen shelf.  If you missed it,   You can view that project here. 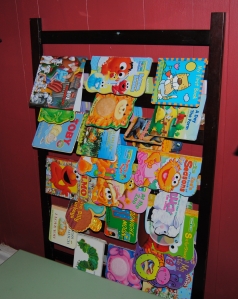