I have a glass cutting board I used for cutting paper and crafts.  I have several cutting boards, and did not have a use for this one in the kitchen so,  I used it for crafting on and cutting paper.  I was sitting at my work station one day and decided to “dress it up” a little.  I had this great black and white polka dot scrapbook paper.  Since the cutting board was made from a clear glass, the idea was to adhere the paper to the back, and allow the polka dot image to appear through the glass without affecting the usable surface. 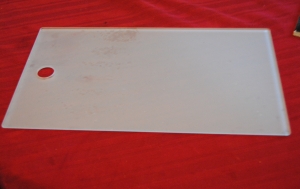 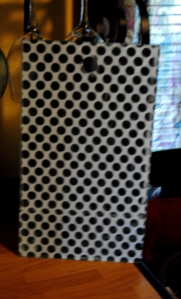 Just think of the possibilities!  It also would make a nice decorative piece also if not used as a cutting board.  You could Mod Podge any image and photos behind the glass!