Recently, I took a trip to Staten Island, NY to visit some relatives and stopped by St. Peter’s cemetery where my ancestors and family members are buried.  It is a large Catholic cemetery not far from Silver Lake Park and located directly across the street from The Staten island Zoo.  My Grandparents, Great Grandparents and Great Uncles are buried there.  My Maternal Grandmother’s parents and brothers rest together in this cemetery.  I visited each ancestor, and left a small, handmade floral to pay my respects to each of them.

I would like to focus now on my Grandmother’s brothers.  My grandmother was the only girl in a family of five very larger than life brothers (seven if only two brothers had survived to adulthood.)  Today, I honor three of my great uncles: William, Joseph, and Edward. 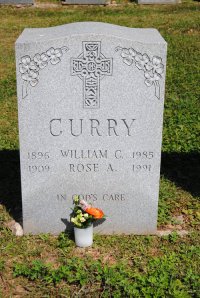 William Charles Curry born October 13, 1896 “Uncle Willie”was the oldest child of Charles Curry and Julia O’Reilly.  As a young man he worked for a company called Gillespie Brothers 11 Broadway, NY, NY According to his WWI Draft Card Record.  His Eyes were brown and his hair was black.  According to family lore he was a talented amateur boxer.  He worked for years for the Staten Island Advance a local newspaper in Richmond County New York. He married Rose Zinicola born in 1909 and together they had three children, Mary, Joseph and Margaret.  William passed away in 1985 at the age of 89.

born November 29, 1905 was a decorated World War II veteran.  He was a radio operator for 20 years for the Exxon Corporation.  He worked on tankers and traveled the world.  He was a technical sergeant for the Air Corps from 1942-1945.  He received two distinguished flying crosses and two Air Medals for his service during World War II.  He never married, and in 1982 passed away after a six-day illness.  He was 77 years-old.  Joseph is buried with his brother Edward.

Edward Joseph Curry “Uncle Pie” was born June 18, 1899.  Family lore says he gained his nickname for winning a pie eating contest.  My great-uncle was a larger than life character known for his sense of humor and personality.  He worked as a dock hand for Viking Company in 1920, and Lived at 103 Monroe Avenue Tompkinsville, (Staten Island, NY) He was described on his draft card as medium height and build with blue eyes and brown hair. He is rumored to have had a child, but he and the women never married.  Edward passed away in 1978 at the age of 79.

Thanks for reading about my maternal New York born Irish ancestors with the surname Curry,  More on the Curry’s to come!

Also looking forward to the Mid Atlantic Genealogy Conference coming up this weekend!  Hope to learn a lot at my first ever genealogy conference!