This project was quick, and easy to create.   If you have never ventured into the wonderful world of Mod Podge before, this is a great starter project for you!  A sports desk clock is also a great gift for the special man in your life or a female sports fan such as myself.  When I stumbled upon this cute little clock made from Ikea, at a Good Will store, I had no clue what if anything I was going to do with it. The price was certainly encouraging! On this day items adorned with a yellow ticket were 50% off !  This cute little item cost just 1 dollar! 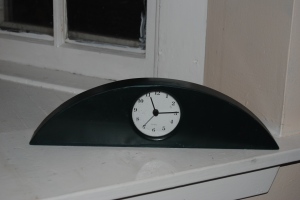 My husband suggested that since the clock was Eagles Green, it would make a great Philadelphia Eagles Football clock.  I thought this was a great idea, in honor of the new football season, and our fantasy football team who opened week one with a win thanks to McCoy and Jackson. I found some sports images online and printed them.  These would be great for decoupage and looked as though they would fit well on the surface,  The clock was a bit of an odd shape after all. 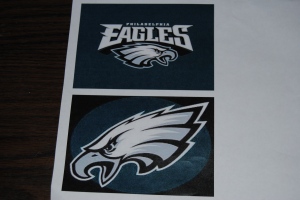 I cut the images out and do to space restraints used the only the eagles letters, and the larger eagle.  I used a small paint brush and applied a light coating of Mod Podge to the back of the paper cut outs and carefully applied them to the front of the clock surface.  I placed in front of the fan, and when dry added additional Mod Podge over the top of the images.  I repeated this step twice, 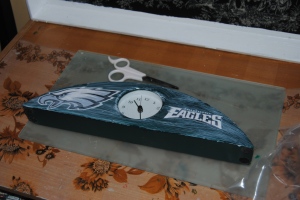 This took less than a half hour to make and came out wonderfully!

Now are you ready for some football? Well at least you’ll know when the game is starting!

Before our daughter was born, my husband had the ultimate sports man room.  It was filled with sports memorabilia, and a fully stocked bar.  We hung out in there regularly  watched movies laughed and joked and even kicked back a few drinks.  Now, a new kind of laughter fills this room. It is no longer the ultimate man room, but it IS the ultimate little girl’s playroom.  My husband and I discussed doing something special in the family room for our daughter Erin. We both liked the nursery wall mural and how it turned out.   Sure, we could have decided on a mural of  princess’s and castles, but I wanted to do something different and also keep true to the original theme of  the room which was sports.  One of her favorite toys is her Phillie Phanatic Pillow Pet, which ultimately gave me the idea.  I also wanted to do something for the hubby.  He was more than happy to give up his room for his daughter, but I wanted to thank him too, after all he is a huge Phillies fan!

I searched the internet for a good example of a Phanatic image I wanted to use as a visual.  I often draw through visually studying a picture before I begin.  I usually use a pencil to outline where I am going to paint.  I found it easier this time to simply draw the lines with a fine brush and black paint onto the wall.  If I made a mistake, I used a magic eraser to wipe away the paint.  (Magic Eraser does not work on a flat painted wall) I thought it would be cute to have him holding a pennant with ” Go Erin” on it.  I used acrylic paints and applied about 3 coats total.    The mural measures a little over 5 feet tall.  Hopefully, it will be a good luck charm this season and beyond!

During the winter after the 1977 season, Dennis Lehman, thought that the team needed a mascot similar to San Diego’s Famous Chicken created the Phanatic with the help of Acme Mascots

The Phanatic debuted on April 25, 1978, at The Veterans Stadium, when the Phillies played the Chicago Cubs.

His mother, Phoebe Phanatic, occasionally appears with the Phanatic. 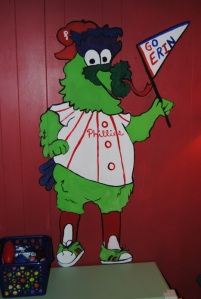