Yesterday, I attended my first Genealogy conference and it was packed with information! It was hosted by the LDS Church and admission was free!  It was an all day event 8:30 am to 4:30 pm.   I took advantage of some of the classes offered such as Irish genealogy, Immigration, Forensic Genealogy as well as local record resources, (Just to name a few!)  Many classes offered handouts with great informational website links. Vintage photo expert Maureen Taylor gave the key-note address on photo preservation and disaster preparedness planning for your priceless photos.  An especially important point due to recent local catastrophe’s such as Super Storm Sandy.

My favorite part of the show hands down was the New Jersey Chapter of The “Genealogy Roadshow” PBS airs a new show by the same name and it based on a similar premise.  On this day It allows the opportunity to sit with a professional Genealogist for 15 minutes to discuss a piece of research that is stumping you. 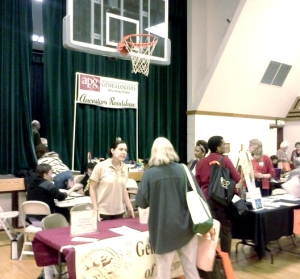 I eagerly waited in line and enjoyed a conversation with a fellow genealogist as eager to get an appointment as I was!  Due to child care issues my husband stayed back and watched the little one so I could attend, but I had to go alone.  The great thing about those interested in Genealogy is they are friendly and eager to share information with you.   I talked to a lot of great people who are passionate about family research!  I booked my appointment and returned at 12:15 to sit with Rich Venezia a Professional genealogist in the New Jersey area.  I brought to him just one of my biggest road blocks: The elusive Uncle Ted.  It was rumored on my maternal grandfather’s side that an uncle worked for the BBC when it was first founded in 1922 as the Station Director in Nottingham England. Inside my Great Aunt’s autograph book is a BBC document on letter head signed by “Uncle Ted” right before she sailed to the United States in 1925.

I haven’t been able to confirm uncle Ted is an actual uncle as I have never been able to link him to either side of the family.  He suggested an interesting concept I hadn’t thought of before: Research the neighbors and try to find clues.  He also suggested I contact someone in the BBC (I had tried before and had no such luck) because he believes someone such as a BBC historian would be interested in such a document and historical information. I also have an unknown photograph of the BBC Riding the “Magic Carpet”  I am assuming this is referring to a radio show at the time.   As luck would have it, this morning I came across a BBC Historical site seeking artifacts from BBC history,  I jumped at the chance and sent an e-mail with information.  Fingers Crossed!

Here are some great Informational websites for genealogy research I learned of at the conference.

One of my favorite speakers was Deborah Large Fox.  If you are as stumped as I am when it comes to Irish Genealogical research this is the blog for you!http://irishfamilyresearch.blogspot.com

http://www.italiangen.org/  If you are interested in researching family members who lived in any of the five New York boroughs this is the site for you!

Wish me luck as I am going thrifting today!  I have been “striking out” lately on finding good Upcycle candidates, but am hoping my luck will turn around today!  Enjoy the rest of your weekend my lovely readers!