They say necessity is the mother of invention.  When it comes to home improvement, sometimes you are forced to think outside the box, as was with the case of our burned kitchen counter top.  When we moved into our home about 7 years ago, our house was in need of some major TLC.  Up until that point the house was more like a college dorm than a family home.  The young man we purchased the home from had moved out to California, and he was letting his friends rent the home from him while he worked on selling it.  Needless to say, they did more damage while they were there, than good.  My husband and I were on a strict budget.  Most of the issues in the home were minor, but irritated us regardless.  One of those “annoyances” involved our kitchen counter top.  Their was a huge, highly visible burn mark right in the middle of the laminate counter top.  My husband and I could not afford to put in replacement counter tops, so for a while I simply used Velcro to fasten a small wooden cutting board to cover the ghastly burn mark, but I needed to come up with a more permanent solution.  My neighbor, god bless him, gave me some left over tile he had from a project he had just completed.  I used most of it for a  backsplash .  While putting up the back splash, I came up with a cost effective solution to our burned counter top problem.  I used the extra tiles to create a ceramic cutting board/ hot plate and matched it to the back splash.  I purchased a combination tile adhesive/grout which works great and is easy to use.  I took the tile and adhered them to the counter top using the adhesive and grout.  I then used the same adhesive and grout in one product  to seal over top and fill in the spaces between the tiles.  I used the smaller mosaic tiles to frame and add some color.  The result was something I could live with and it saved me hundreds of dollars in costs to have the counter top replaced.  I thought I would share this for those like us on a budget, but looking for inexpensive solutions to home improvement problems.  Almost 7 years later we still use the space as a hot plate and cutting board and replacing the counter tops became less of a priority on our to do list! 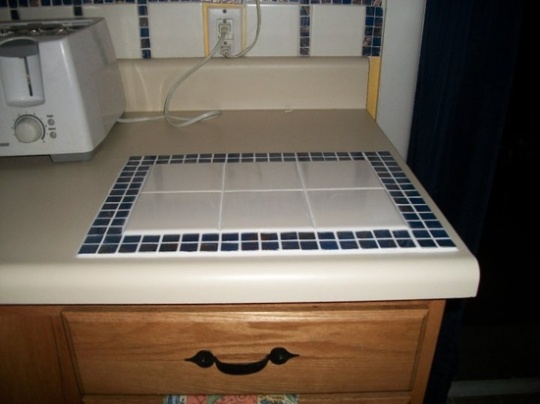 4 thoughts on “Necessity, The Mother of Invention-using left over tile to create a counter top cutting board/hot plate”